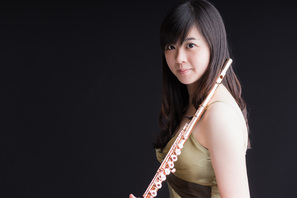 Flutist Pei-San Chiu hails from Taiwan and made her debut at Carnegie Hall in 2012 as the first-prize winner of the Alexander & Buono International Flute Competition. In the same year, she was invited to perform in the Asia Flute Congress as a part of the Young Flutist Elite Recital in Taipei. Ms. Chiu was also invited to Rio Harp Festival 2013, giving duo concerts in Rio De Janeiro, Brazil. In addition to solo and chamber performances, as an active orchestral musician, Chiu is the recently appointed Principal Flute of the Lexington Philharmonic. Lexington Herald-Leader says “Petrushka…Chiu filled the many flute solos with character and vitality” “A Midsummer Night's Dream... you would swear that Terrell programmed this piece simply to show off new principal flute Pei-San Chiu…the flutes really carry the piece with their bookending phrases, a gorgeous solo and spritely dances throughout…” In 2012, she was invited to the Music Masters Course in Yokohama, Japan, where she served as the principal flutist under the batons of world-renowned conductors such as Naoto Otomo and Michael Gilbert. Ms. Chiu has performed with the Evansville Philharmonic and Singapore Symphony Orchestra.

Over the courses of her study, she also served as the principal flute for Indiana University’s Symphony Orchestra, Chamber Orchestra, Wind Ensemble and New Music Ensemble. Ms. Chiu’s passion for new music has also led her to collaborate with many prominent young composers, and she has premiered several works in both Taiwan and USA. She was invited to perform in Midwest Composers Symposium and as a regular guest artist for Holographic, a new music concert series based in Bloomington, Indiana.

Ms. Chiu received a Bachelor’s degree of Music from Taipei National University of the Arts, where she studied with Prof. Jinny Liu. She has subsequently completed a Master of Music at Indiana University, where she was awarded the prestigious Performer Certificate from the Jacobs School of Music. She is currently pursuing a Doctor’s degree of Music under Prof. Thomas Robertello at Indiana University, where she was appointed the Associate Instructor for flute from 2009 to2013, teaching secondary flute lessons and a technique class for flute majors.