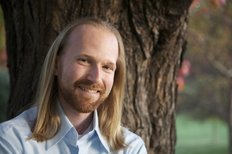 Nicholas S. Omiccioli (b. 1982) is currently a resident with the Charlotte Street Urban Culture Project in Kansas City and production coordinator of newEar Contemporary Chamber Ensemble. He was recently awarded a residency at Copland House and was a finalist for the 2013 Rome Prize. His works have been performed in Canada, the United Kingdom, Italy, Austria, Lithuania, Thailand, New Zealand, China, Sweden, and throughout the United States. Nick has worked with the Jasper String Quartet, Calder Quartet, Aspen Contemporary Ensemble, Curious Chamber Players, DuoSolo, Ensemble Platypus, le Nouvel Ensemble Moderne, l’Orchestre de la francophonie, Society for New Music, Brave New Works, Contemporaneous, Wild Rumpus New Music Collective, Kansas City Chorale, and the Simon Carrington Chamber Singers, among others. Current collaborations include a new work for the Berkeley Symphony through the American Composers Orchestra Earshot New Music Readings and a new work for Alarm Will Sound. Nick will also be a visiting composer at the mise-en music festival this summer in New York City and will have his Carnegie Hall debut by Khorikos in May.

power3 (2014) for flute, clarinet,  and  piano was commissioned by Pei-Lun Tsai for her doctoral trio project at the University of Missouri-Kansas City. power3—read as “power trio”—is a reference to the blues-rock power trios of the 1960's such as Grand Funk Railroad, The Jimi Hendrix Experience, and Cream. These power trios consisted of guitar, bass, and drums and showcased the virtuosity of the performers over the significance of the lyrics/vocals. The entire work is in three sections (plus a coda) and based on the chords C, F, G—or I, IV, V—a typical progression in rock music and the backbone of all blues music.