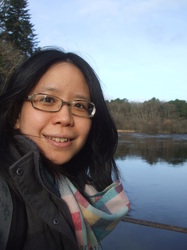 Chiu-Yu Chou (b. 1981)
Chiu-Yu was the winner of the ISCM-IAMIC Young Composer Award (2011) and the recipient of the first prize of Orchestral Composition Competition held by the National Taiwan Symphony Orchestra (2010).  Born in Kaohsiung, Taiwan, she studied composition with Professor Lee, Tzyy-Sheng at an early age and received her BA and MA in composition at the Taipei National University of the Arts (TNUA) under the direction of Professor Lai, Deh-Ho and Professor Yang, Tsung-Hsien.  She earned her PhD at the University of Manchester, where she was supervised by Professor Philip Grange.


Duet for flute and clarinet (2014)
Commissioned by Pei-Lun Tsai, Duet for flute and clarinet was composed during March and April, 2014.  Although it is without a poetic title, the fluid and mellow quality of the two winds provides it the essence of lyric.  On the other hand, in my imagination, the interaction of the two melodic instruments is very like a series of movements between two dancers, which are responding and supporting each other’s gestures.  These two ideas helped me to look for the beauty of moderate tension between undulating voices in this work.